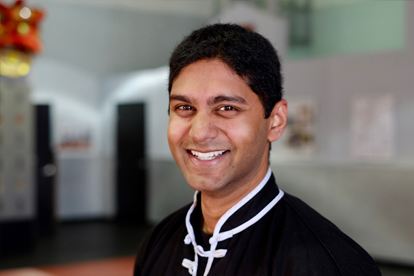 As a child, I was always physically the smallest. I always envied the very tall and athletic individuals in school who took their superior DNA for granted. By the time I reached high school I was barely 5 feet in height and weighed in at an impressive 81 lbs. I was just a late bloomer, or so I was assured. However, high school can be cruel when you are the underdog. I learned in my freshman year alone that I was the only student small enough to fit into trashcans and gym lockers. I needed a change in my life. I needed to feel empowered and confident. Little did I know that change was on the horizon.

I graduated high school with top honors and was accepted into the University of California San Diego where I studied pre-law. College was a great experience for growing and learning. It also helped me achieve more independence, and yet something was still missing. I wanted the confidence to be able to handle myself, be stronger, and feel accomplished.

I had always been interested in martial arts. My roommate and I had always talked about doing something together and this seemed like the perfect time to get started. We stopped by the White Dragon Martial Arts School in Mira Mesa, which was recommended by a good friend of mine, and took a tour of the school with Sifu Ming Lau; the man who would later become my mentor and teacher in the martial arts world. After trying one introductory lesson I knew White Dragon was the place for me and my life-changing journey was finally beginning.

By 2006, I had worked my way through the ranks and been promoted to the level of Instructor by my teacher. I was gaining strength, experience, confidence, and skill. These were the qualities I had waited so long to achieve. In addition to that, my teacher taught me other values of even greater significance. I learned patience, discipline, humility, and most importantly, courage. Sifu Lau helped me empower myself by strengthening my spirit. In the years that followed, I distinguished myself in several national and international competitions. I earned top honors in hand and weapon forms, kickboxing, grappling, and wrestling. My life changed so dramatically, I couldn’t imagine a life without White Dragon Martial Arts. A difficult decision had to be made.

I finished college with top honors and was headed to law school. During this time, I even had the opportunity to do a prestigious internship in Washington DC for former Senator, Hillary Rodham Clinton. My work in Washington was very successful, and I was invited back to take a long-term position. Things were going according to plan. Yet I couldn’t live a life that didn’t have White Dragon in it. My life was about to change in a way I never expected. I made the most difficult decision in my life. I chose to leave the “safe” path, and I asked my teacher for a chance at becoming a Chief Instructor. Naturally, this decision didn’t go over very well with my family. But my passion for the training and values at White Dragon simply couldn’t be matched. I was going to do whatever it took to achieve my goals. My teacher took a chance on me and I wasn’t going to let him down.

In 2010, Master Nathan Fisher, the founder of White Dragon Martial Arts, promoted me to the level of Chief Instructor with the opening of the Chula Vista location. The Chula Vista school quickly became one of the most successful schools in the organization, gaining the largest student body in White Dragon history within its first year. By 2012, the Chula Vista School, although still very new, managed to rank in the top two schools at both the student and instructor’s Dragon Cup tournaments.

In 2012, my hard work finally paid off. Master Fisher, along with his teacher Grandmaster Doc Fai Wong promoted me to the rank of Sifu. This honor was especially meaningful because the road that led to this moment was long and challenging; a road that was filled with many obstacles and setbacks. However, the guidance of my teachers along with the support of my family is why I get to have the best job anyone could ask for.  From 2012 to 2018, the Chula Vista school has ranked in the top three at every Dragon Cup tournament, one of the largest martial arts tournaments in the United States. Between 2014 and 2018, my personal students have ranked in the top five of the Dragon Cup Tournament both at the student and instructor levels. My own personal student was a three-time junior grand champion at this very competitive tournament between 2014 and 2017. My instructors have also consistently been rated in the top 10 for both teaching and tournament competition at White Dragon. In fact, one of my personal students was rated the top instructor at the student Dragon Cup Tournament in 2017. Although Chula Vista is one of the newest schools in the organization, it has quickly proven to be one of the most successful. My school has the largest student body in the organization for 6 years running and continues to thrive with one of the largest professional training staffs of any school.

Every day I get to change people’s lives with martial arts just as my teacher did for me. There is no greater joy than seeing people in need of something special and significant, achieving incredible feats of strength and courage. Watching my students grow and accomplish things they once thought impossible reminds me of why giving up the “safe” path, was ultimately the best decision of my life.