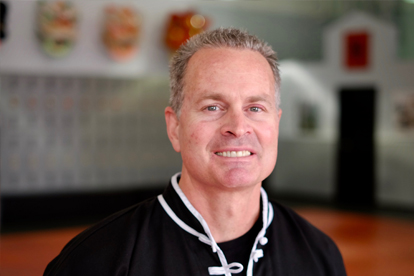 I grew up in Inglewood and Torrance, California. I moved to San Diego after graduating from high school to attend San Diego State University to play Volleyball for the Aztecs. I graduated with a Bachelor of Science Degree in sports medicine.

I’ve seen and experienced a great deal of violence by virtue of where I grew up. Following one particularly violent altercation involving multiple attackers, I found myself in need of some professional training. I began studying Choy Li Fut Kung-Fu with Master Nathan Fisher at White Dragon Martial Arts in La Mesa. The power and versatility of this style of martial arts was the perfect fit for me. I was instantly impressed with how effective Choy Li Fut was as a system of self-defense. The practicality and intensity of the work-outs were incredible, and I was amazed at the results. I dedicated myself to reaching the black sash rank and broke the record for being the fastest student to achieve that goal in the history of the school.

It was when I became an instructor at White Dragon that I realized that my true passion in life was helping others improve themselves through martial arts. The unique mentoring relationship between teacher and student was something I had never experienced before. Respect for self and others, goal achievement and the core values at the heart of White Dragon caused me to realize that teaching martial arts was what I wanted my life’s work to be. After graduating from college in 1996, I was given the opportunity to run the White Dragon Martial Arts School in Oceanside.  A year later, I was promoted to the level of Sifu.

Along the way I have competed successfully in a variety of different national and international martial arts tournaments, winning awards for Kung-Fu and Tai Chi hand a weapons forms, as well as Chinese kickboxing and Tai Chi push hands. Over the years, I have promoted many of my own students to the level of Black Sash in both Tai-Chi and Choy Li Fut Kung-Fu. And in 2009, I earned my 5th Degree Senior Black Sash, the highest rank in the Grandmaster Doc-Fai Wong's Plum Blossom International Federation.

When I'm not teaching martial arts or working out, I enjoy spending free time with my family, the beach, coaching volleyball, shooting sports and being a good husband and father.