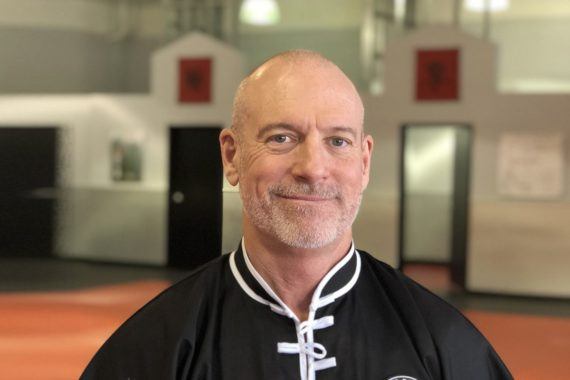 One of the most life changing experiences I had was getting bullied by a couple of bigger kids when I was 10, because it led me to begin the study of martial arts. At first, I tried to learn from an old shaolin kung fu book that my dad had on his shelf, but soon realized that I couldn’t learn much on my own. So, I talked my dad into enrolling me in a school that taught Judo and Jiujitsu in Berkeley, California. There I learned the age old adage: the bigger they are, the harder they fall.

After a few years of gi arts, I decided to change disciplines to study Kenpo Karate, the ultimate mixed martial art of that time, under the late Kenpo Master Ron Lee. By age 20, I received my Kenpo black belt and was promoted to be the Chief Instructor of Mr. Lee’s Berkeley headquarters school.

Eventually my thirst for even more training led me to the study of traditional Chinese martial arts, thought by many to be the foundation of all modern systems of fighting. So in 1980, I made the short drive across the Bay Bridge to San Francisco, to begin the study of Choy Li Fut Kung Fu and Yang style Tai Chi under the famous Grandmaster Doc Fai Wong. I had plenty of time to immerse myself in learning yet another martial art, because I had just graduated with honors from the University of California at Berkeley, where I earned a Bachelor of Arts Degree, with a Major in Architecture.

In October of 1985, I decided it was time to do something with all of this knowledge. I wanted to make it possible for anyone to benefit from martial arts, regardless of age or level of physical fitness. So I moved to La Mesa, California where I opened the first White Dragon School. My intent was to create a martial arts institution dedicated not just to the development of self-defense ability, but also health and self-improvement. In addition to offering a wide variety of specialized group classes, the school also offered weekly one-on-one, personal training to every student at no extra cost. This approach insured that even students with special learning needs could be successful learning martial arts.

As Doc-Fai Wong’s personal student, I was able to win numerous first place finishes in both national and international competitions. I was the first place champion at the International Tai Chi Push Hands Tournament in Taiwan in 1990, and the overall Push Hands Grand Champion at the prestigious Taste of China Tai Chi Tournament in 1991. My tournament success also helped me produce several grand champion competitors in both traditional and mixed martial arts tournaments over the years.

The White Dragon method became hugely popular, and by 1992, we had three schools in the San Diego area. In recognition of this success, I was promoted to the level of Master by the late Great Grandmaster Hu Yuen Chou, then one of the highest-ranking Choy Li Fut and Yang style Tai Chi grandmasters in the world. Today, with eight schools serving San Diego County and Temecula, White Dragon Schools is considered to be one of the largest traditional Chinese martial arts organizations in Southern California.

In addition to martial arts, I’ve continued my passion for the outdoors by being an avid hiker and mountain biker over the last 35 years. The rugged beauty of the Sierra Nevada Range, and the Desolation Wilderness in particular, are unsurpassed in my opinion. (The Mount Whitney climb has been a favorite of mine for years!) I have also explored some of the rain forest areas in Southern Mexico, and Costa Rica, as well as scuba-dived in the Caribbean, Central America, South Africa and Hawaii. (The great white shark cage dives in South Africa are a must!) There’s nothing like seeing nature on foot and getting in even better shape for my life as a martial artist!