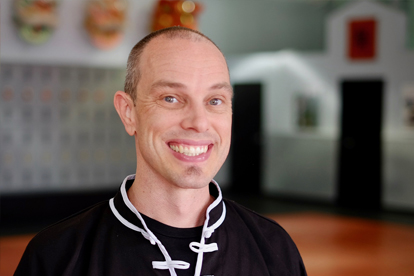 Some of my earliest memories are of watching Kung-Fu Theater on Sunday mornings. I can still remember practicing bowing like martial arts masters portrayed in the movies I watched. The concepts of respect and humility combined with the ability to aptly defend yourself resonated with me very deeply, even at a young age. As a child, I was removed from the care of my abusive family and placed into foster care. I quickly became the target of bullies because I was smaller and bashful. Unfortunately, the State did not offer any form of self-defense training to its wards, so I often got into fights. When I turned 18 and “termed out” of the care of the court and I became homeless. I blamed everyone else for the negativity in my life. One day, I had an epiphany: I didn’t want to be homeless and full of blame. I found a job, a place to live, and White Dragon Martial Arts.

White Dragon was a turning point for me. It provided me with the supportive family I never had, and a purpose to my life. My teacher, Sifu Ben Stanley, has been my teacher for fifteen years and has been a positive role model and father figure—things that I didn’t have much of growing up. It is because of his influence and training at White Dragon that I developed discipline and a sense of self.  At his urging, I participated in many tournaments and won medals, many first place, in Kung-Fu, Tai Chi, and combative competitions, including the Plum Blossom International Federation Tournament in San Francisco, the International Chinese Martial Arts Championships in Florida, and the First International Tai Chi Chuan Championship in Taiwan.

I knew from the first months of training that being a Sifu was what I wanted to do with my life. I want to provide a positive, encouraging environment for my instructors and students; I want people, who, like me, feel lost and unsupported, to find a Kung-Fu/Tai Chi family. I want people to feel confident that they can defend themselves and feel good about what they’ve accomplished. Because of my years of training at White Dragon Martial Arts, I’ve developed these things and want to share what I’ve learned with others.

Traveling for various martial arts tournaments fueled my desire to see the world.  I’ve hiked in Hawaii and the northern California redwoods, road tripped along the Oregon and Washington coasts, and seen the rich culture of China and Hong Kong. In addition to travel, I also enjoy finding and listening to records. Music is a passion in my life and my collection spans blues, jazz, classical, classic rock, reggae, country, alternative, and rap. I love the way musicians tell their stories and express their creativity through their melodies and vocals. I also explore my own creativity through my art. I’ve been a woodworker for almost twenty years, and over the past few years, have explored painting using stencils. I enjoy the puzzle of creating a negative image and figuring out how to create a stencil out of it. Lastly, my dogs, Angua and Gaspode, provide me with such joy. Whether it is chasing the ball Fiesta Island, agility training, or hanging out by the fire, they are a constant source of unconditional love.