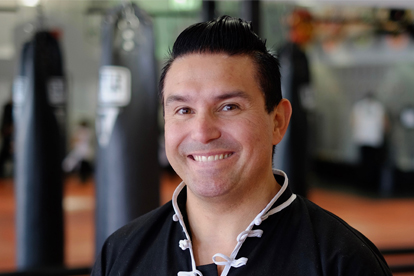 A native of San Diego, I started my martial arts training at the age of eleven. When I was fourteen I began my study of Choy Li Fut Kung Fu and Yang style Tai Chi at White Dragon's headquarters school in La Mesa, California, under the Founder of White Dragon Schools, Master Nathan Fisher. Eventually, I rose to be one of Master Fisher's highest-ranking instructors.

Participating in countless martial arts tournaments and exhibitions, I hold the record for winning the most Grand Championships in White Dragon's Annual Instructors Competition. I’ve also taken top honors in several open tournaments throughout the United States and abroad. Rather than specializing in just a few events, I chose to compete in Kung-Fu and Tai Chi hand and weapon forms, Tai Chi push hands, San Da kickboxing, mixed martial arts (MMA), and most recently, submission grappling, medaling in most categories. In recent years, my students have followed in my footsteps by winning in some of the top martial arts tournaments in the country and in Mainland China.

In 1998, I was promoted to the level of Chief Instructor of the White Dragon School in La Mesa, California. In 2000, I was promoted to the rank of Sifu, making me a Seventh Generation Sifu in the Choy Li Fut Kung-Fu lineage and a Fifth Generation Sifu in the Yang Family Tai Chi lineage. In 2009, I earned my 5th Degree Senior Black Sash, the highest rank in Grandmaster Doc-Fai Wong's Plum Blossom International Federation. On May 5, 2012, Grandmaster Doc Fai Wong, promoted me to the level of Tai-Sifu, or Master, to acknowledge my leadership at White Dragon’s headquarter school, and to recognize the number of Sifu level instructors I’ve advanced.  Currently, I am one of the highest-ranking chief instructors in the Plum Blossom International Federation.

I consider the arts passed on to me to be a priceless treasure. It is both a privilege and honor to be able to share what I have learned with others and to witness the positive transformations in the lives of my students. I continue to train my kung-fu daily, keeping my mind, body, and spirit healthy and capable, so that I can help others walk the path I’ve chosen for many years to come.