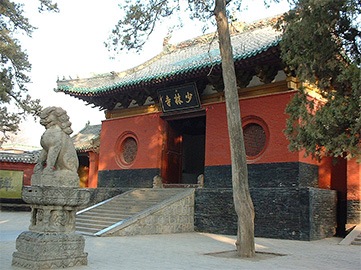 From the Shaolin
Temple to Today

Choy Li Fut was founded in 1836 by Chan Heung, a well-known and highly-skilled martial artist of that period. Chan Heung was born on August 23, 1806 in King Mui Village in Guangdong province. His martial arts career began at the age of seven, when he went to live with his uncle, Chan Yuen-Woo, a famous boxer from the legendary Shaolin Temple. From Chan Yuen-Woo, Chan Heung learned the art of Southern Shaolin Kung-Fu and became so proficient at it that by the age of fifteen he could defeat any challenger from nearby villages. By the time he reached his seventeenth year, Chan Heung was ready to learn more. So, his uncle took him to Li Yau-San, a senior classmate from the Southern Shaolin Temple. Chan Heung spent the next four years perfecting his kung-fu under Li Yau-San's careful eye.

It was apparent to Li Yau-San that after only four years of training, Chan Heung was again ready to move on to higher levels. In ten years, he had already reached a level in kung-fu that had taken Chan Yuen-Woo and Li Yau-San twenty years to attain. Li Yau-San suggested a Shaolin monk who lived as a recluse on Lau Fu mountain as the best teacher for further training. The only problem was that the monk, Choy Fook, no longer wished to teach martial arts. He wanted only to be left alone to cultivate Buddhism. Realizing that reaching his highest potential in kung-fu meant finding the monk and becoming his disciple, Chan Heung set out on the long trek to Lau Fu mountain. 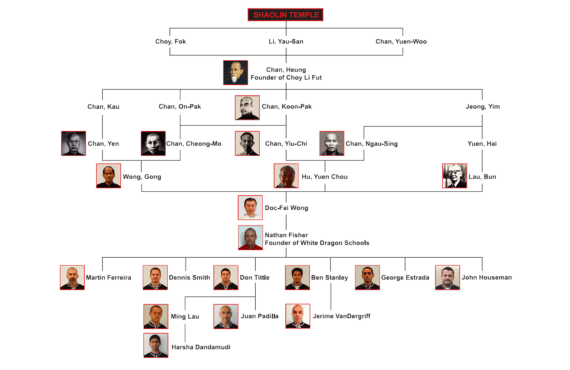 Choy Fook was a Buddhist monk whose head had been seriously burned when he took his Buddhist vows and had healed with ugly scars. This gave him the nickname "Monk with the Wounded Head". Armed with that knowledge, Chan Heung sought out anyone on Lau Fu mountain who could help him find Choy Fook. Finally, he located the monk, and handed him a letter of recommendation from Li Yau-San. After waiting patiently to be accepted as Choy Fook's disciple, he was stunned when the monk turned him down. After much begging from Chan Heung, Choy Fook agreed to take the young man as a student—but only to study Buddhism. So, Chan Heung studied Buddhism for many hours a day with the monk of the scarred head and practiced his martial arts by himself far into the night.

Early one morning, Chan Heung was practicing his kung-fu, leg sweeping heavy bamboo stalks and kicking up stones, then smashing them to pieces before they hit the ground. Suddenly, the monk appeared and asked him if that was the best he could do. Chan Heung was shocked when Choy Fook pointed to a large rock weighing more than thirty kilograms and told him to kick it twelve feet. Bracing himself, Chan Heung exerted all of his strength as his foot crashed against the rock, sending it barely twelve feet away. Instead of giving the expected compliment, Choy Fook placed his own foot under the heavy rock and effortlessly propelled it through the air. Chan Heung was awestruck by this demonstration of "superpower." Again, he begged Choy Fook to take him as a martial arts disciple. This time the monk agreed, and for eight years Choy Fook taught Chan Heung both the way of Buddhism and the way of kung-fu.

When Chang Heung was twenty-nine, he left the monk and went back to King Mui village, where he spent the next two years revising and refining all that he had learned from his teachers. Chan Heung had now developed a new system of kung-fu. In 1836 he formally established the Choy Li Fut system, naming it in honor of two of his teachers, Choy Fook and Li Yau-San, and used the word Fut, which means "Buddha" in Chinese, to pay homage to his uncle, Chan Yuen Woo, and to the Shaolin roots of the new system. Chan Heung set up a martial arts school in the temple of King Mui Village to teach the new system. As his reputation spread, hundreds of people from nearby villages came to learn Choy Li Fut. And, as the decades passed, Chan Heung saw Choy Li Fut become one of the most widely practiced kung-fu systems in Southern China.

Chan Yiu Chi had many great students, one of whom was Great-Grandmaster Hu Yuen Chou (1906-1997), a native of Fut San. Dr. Hu was a physician by trade and spent over twenty years studying Choy Li Fut from Chan Yiu Chi. Famous for his legendary fight with a Russian boxer in 1945, Great-Grandmaster Hu Yuen Chou spent decades promoting the Chinese Martial Arts in Canton and Hong Kong. He is revered in traditional Chinese martial arts circles as one of the last high-level Grandmasters of Choy Li Fut and Yang style Tai Chi Chuan. Great Grandmaster Hu’s most notable student is our own Grandmaster Doc Fai Wong, who is a 5th generation Choy Li Fut Grandmaster and one of the world’s most well-known authorities on Choy Li Fut Kung-Fu. One of his prominent students is Master Nathan Fisher, the Founder of White Dragon Martial Arts. Because of these high-level connections to the system’s founder, White Dragon is one of the few schools in the country that teaches the complete Choy Li Fut system as described in the original Chan family archives. 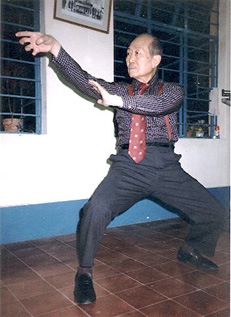