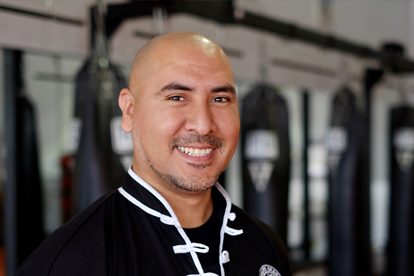 I was first introduced to traditional Chinese martial arts at the early age of eight in my native Guadalajara, in Jalisco, Mexico. My early studies were in the art of Shaolin Kung-Fu until I immigrated to the U.S with my family in 1990. Shortly after arriving in the U.S., I enrolled at White Dragon Martial Arts in La Mesa, California and began my training in Choy Li Fut Kung-Fu and Yang style Tai Chi.

My passion and dedication to training helped me advance quickly through the ranks and earn several prestigious achievements within the organization. I began my teaching career after earning my red sash under Tai Sifu Donald Tittle in 2003. Within two years I was promoted to Assistant Chief Instructor at White Dragon's headquarters school. During that time, I produced many high-ranking students and instructors and consistently placed in the top three in most instructor competitions, including winning White Dragon's 2007 Instructor's Grand Championship, a competition of over 100 highly trained martial arts instructors.

I think the highest honor of all is being able to work with students and help them achieve their important life goals. Every day I have the privilege of helping transform people’s lives for the better, from kids as young as 4 to people in their 90's. I like being there every step of the way to help people of all ages and abilities become true martial artists.  Leading White Dragon Chula Vista has been one of the most rewarding times in my life!