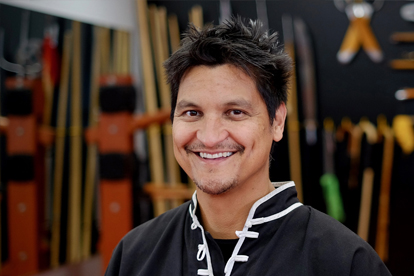 As a child, I suffered from chronic asthma, which prevented me from pursuing organized sports such as basketball and football. Regular hospital visits and the daily use of medications were prominent features of my childhood. As I got older, my asthmatic condition improved, but I was on various medications well into my teenage years. Not long after, at the age of 20, I was diagnosed with lymphoma, the recovery of which lasted over a year and left me 40 pounds lighter.

Having gone through these health challenges, I was determined to regain my strength and be as healthy and successful as possible. And that was the beginning of my journey with White Dragon Martial Arts. I started my training at White Dragon La Mesa, while attending college. My days were packed with classroom studies and my evenings were filled with kung fu, tai chi, and combative art classes.

Several years of diligent study and training resulted in graduation from SDSU with a degree in Criminal Justice, earning a California Teaching Credential from graduate school, and an invitation to enter the Instructor Training Course at White Dragon.

Upon completing the Training Course in 1998, I became a part-time instructor at the La Mesa school. During this time, I was also working as an elementary school teacher, which I immensely enjoyed. However, after a trip to China for the first International Choy Li Fut Kung Fu Convention alongside Grandmaster Doc-Fai Wong and Master Nathan Fisher (Tai-Sigung), I decided to purely dedicate my focus to martial arts.

In 1999, I took a full-time position at our Clairemont location, where I was promoted to Chief Instructor in 2001. One year later, in May of 2002, I was promoted to the level of Sifu and had the honor of joining the Choy Li Fut kung fu and Yang style tai chi lineages. I continued the rigorous training for the next seven years to earn the fifth degree senior black sash in 2009, the highest rank in Grandmaster Doc-Fai Wong's Plum Blossom International Federation.

Over the years, I have been privileged to take several trips to China together with Grandmaster Doc-Fai Wong and other members of the Plum Blossom International Federation. These unique travel opportunities allowed me to deepen my knowledge of Chinese martial arts, and explore the past history of kung fu and tai chi. Additionally, the trips helped me develop a strong interest in traditional Chinese lion dance, which I later pursued by developing a professional team at White Dragon. I have found lion dancing to be a great blend of physical training, artistic expression, and an integral part of Chinese martial arts training. Watching our team perform at Lunar New Year celebrations, weddings, and other cultural events, is always a thrill!

The travels to China also included competition on four separate occasions, including the 1st Traditional Wushu Tournament, the Hua Xia Garden Cup, and the World Tai Chi Chuan Championships in Taiwan. I have also enjoyed competing in a wide variety of tournaments held throughout the United States including the International Open Kung Fu Championship and numerous Plum Blossom Championships, among others. More importantly, my students have competed and achieved some of the highest honors, including overall grand champion awards at the International Chinese Martial Arts Championship as well as the Dragon Cup Championship on several occasions.

In 2018, after 25 years of devoting my life to martial arts, in the form of studying, training, and teaching many students to the senior advanced levels in kung fu and tai chi, I was humbled to be promoted to the rank of Tai-Sifu (Master) by Grandmaster Doc-Fai Wong and my teacher, Master Nathan Fisher.

I am now pleased to say that my asthmatic condition is managed through regular doses of exercise and a healthy diet. The days of worrying about cancer recurrence are long gone. I attribute much of this to the kung fu lifestyle, which has played a major role in helping me to stay physically and mentally strong. Today, I am determined as ever to pass on the valuable skill and knowledge I have gained through years of arduous training to those that are enthusiastic and dedicated.