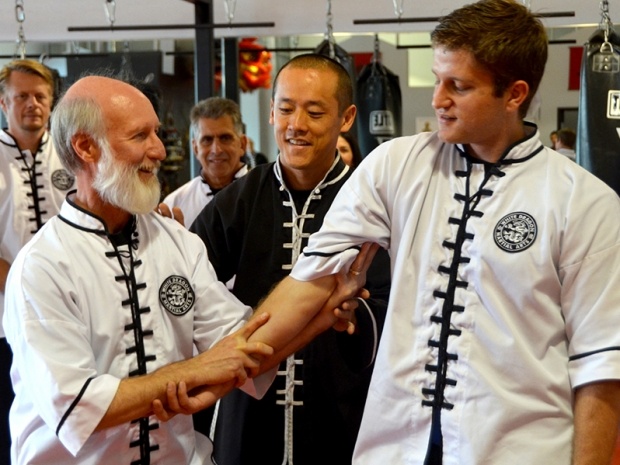 Kahm na pronounced “kum-na”, roughly translates to the art of seizing, grasping and locking. Called Chin na in mandarin, this is the art of applying joint locking and breaking techniques.

Kahm Na is not its own “style” but is an integral part of most traditional Chinese martial arts systems. Historically, it is thought by many to be the Grandfather of many of today’s popular joint locking based systems such as ju jitsu, hapkido, and aikido. Joint Locking represents one quarter of the four skills of fighting that make arts such as Choy Li Fut and Yang Tai Chi Chuan such complete and versatile systems of self-defense.

Kahm Na skills are an invaluable component to the serious martial artist’s arsenal because the techniques are extremely practical.  Since not every violent encounter will require lethal force, kahm na arms an individual with options to restrain and subdue an assailant rather than seriously injure them. And, for those situations where it’s your life or his, joint locking can easily become joint “breaking” by applying the techniques with more explosive force and energy, causing damage that can quickly debilitate an attacker.

Another component of kahm na that is little known is “saw hau” or “bai hei”, which means locking the throat and sealing the breath. These are the chocking techniques of the art. Again, these techniques are extremely practical because if there’s no blood and oxygen going to your opponent’s brain he can’t hurt you.  In fact he can’t do much of anything because he’ll be unconscious! It takes less than ten seconds to render even the largest person unconscious with a well-executed choke.

I had the great privilege of acquiring my kahm na education from my Sifu, Master Nathan Fisher, as well as from his teachers Grandmaster Doc Fai Wong and Great Grandmaster’s Hu Yuen Cho and Wong Gong, all high level masters in the Choy Li Fut Kung Fu system. Students can learn direct application of these kahm na skills integrated with striking, kicking, and throwing within the self-defense techniques taught at White Dragon Martial Arts.