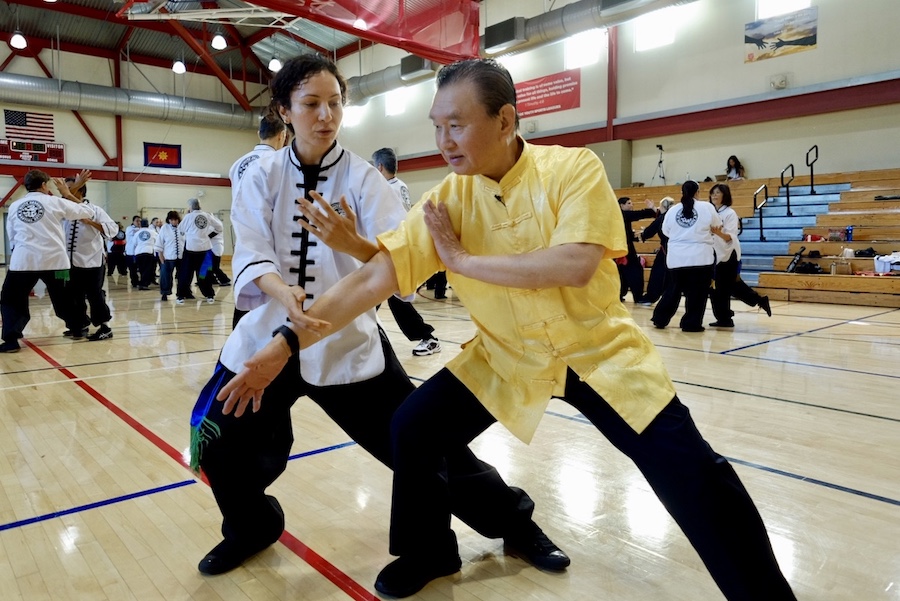 Forms practice teaches you your own proper relaxation, body position, breathing, and concentration. Push hands practice prepares you to react correctly to anything the opponent attempts, including his own natural tensions and weaknesses.

Push hands practice starts with single-hand push hands, where contact is made with just one hand against the partner’s same hand and wrist. Therefore, your right hand makes contact with the opponent’s right hand. You should not initially try to compete with each other. Instead, plenty of time should be taken to develop a relaxed pattern and your own ting jing (listening energy). Ting jing is the ability to automatically read and understand the opponent’s energy and how that energy leads to his next move.

The next step in push hands training is two-handed or double push hands. However, before even considering competing or sparring with your push hands partner, you must learn the traditional double push hand patterns, working on the principle nian jing (sticking energy) to avoid the mistake of leaving and forcing energy. You must also be able to change directions and switch both hands within the traditional patterns before moving on to competition or attempting to overcome your opponent.

When you can feel the partner is off balance and no longer connected with sticking energy, you can use fa jing (explosive energy) to launch him away from you.

After a lengthy time practicing push hands and truly understanding the above examples of jing or energy, you can practice moving step push hand patterns to further develop sticky or adhesive (nian jing) and continuing or following (lian sui) principles.

Competition push hands includes freestyle push hands. To be successful at this you must work on the “Give up yourself to follow others,” which is called the principle of yielding. The true test of avoiding leaving (diao) and forcing (ding) can be found at this stage. Once the match is into the leaving and forcing stage of stiff, tense combat it becomes wrestling and is no longer push hands practice.

This article originally appeared in the June 2001 issue of Inside Kung Fu Magazine, “Training for Life” by Grandmaster Doc-Fai Wong.