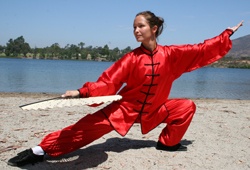 The ancient practice appears to be good for you in just about every way.

The gentle, 2,000-year-old Chinese practice of tai chi is often described as “meditation in motion.” But the Harvard Women’s Health Watch newsletter suggests a more apt description is “medication in motion.”

Tai chi, the most famous branch of Qigong, or exercises that harness the qi (life energy, pronounced “chee”), has been linked to health benefits for virtually everyone from children to seniors. Researchers aren’t sure exactly how, but studies show that tai chi improves the quality of life for breast cancer patients and Parkinson’s sufferers. Its combination of martial arts movements and deep breathing can be adapted even for people in wheelchairs. And it has shown promise in treating sleep problems and high blood pressure.

Flexibility and strength. Tai chi is credited with so many pluses, physiological and psychological, that Chenchen Wang, an associate professor of medicine at Tufts University, set out earlier this year to analyze 40 studies on it in English and Chinese journals. Wang found that tai chi did indeed promote balance,

flexibility, cardiovascular fitness, and strength. In a study comparing it with brisk walking and resistance training, a tai chi group improved more than 30 percent in lower-body strength and 25 percent in arm strength, nearly as much as a weight-training group and more than the walkers.

“Benefit was also found for pain, stress, and anxiety in healthy subjects,” adds Wang, who was influenced by her mother, a Chinese doctor, to study an integration of complementary and alternative medicine with Western medicine.

In a 2008 analysis, Harvard Medical School’s Gloria Yeh, an internist and assistant professor, reviewed 26 studies in English and Chinese and reported that in 85 percent of trials, tai chi lowered blood pressure. Other studies have shown it to reduce blood levels of B-type natriuretic peptide, a precursor of heart failure, and to maintain bone density in postmenopausal women. The nonprofit Arthritis Foundation offers its own 12-movement tai chi sequence.

Wang says more study is needed. Still, says New York Times personal health writer Jane Brody: “After reviewing existing scientific evidence for its potential health benefits, I’ve concluded that the proper question to ask yourself may not be why you should practice tai chi, but why not.”

Lesson One: Find a teacher. “Learning from a book or video just does not work,” says Greg Woodson, vice president of the international T’ai Chi Foundation and a teacher for 35 years. Students need real feedback from a teacher who can make sure exercises are done correctly “so the practice does not cause the type of injury it’s designed to alleviate,” he says. One example: Weight-bearing feet need to be flat on the floor to avoid knee stress, “an extremely subtle point that an experienced teacher will see.” Woodson suggests that if a teacher has less than 10 years of experience, you should make sure he or she has the backing of a school or a more experienced teacher.

How much tai chi is enough? “Data suggest the minimum amount for effective results” is once- or twice-weekly sessions for eight to 12 weeks, says Wang. No pain, big gains.