Homepage / Blog / For Some Exercises, Slower is Better 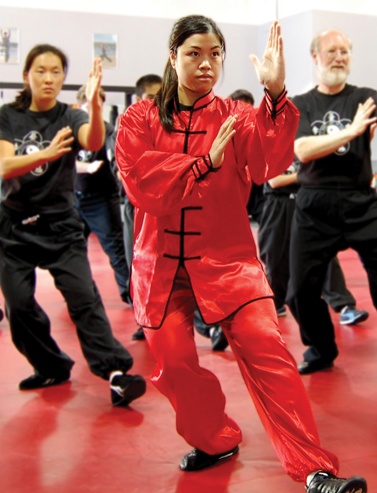 For Some Exercises, Slower is Better

If you’re familiar with exercise, you know that speed is an important factor to control. For common exercises like running and weight lifting, volumes of research has shown that it’s generally necessary to move faster for a more intense cardio workout and to make measured, controlled movements for building muscles. Other workouts, like mind-body exercises (e.g., yoga and tai chi), are somewhat harder to pin down. They aren’t cardio exercises, nor are they strictly muscle building.

The slow, flowing movements of mind-body exercises have been around for centuries, and they have been shown to help people develop balance,flexibility, and muscle function. Consequently, they’ve been increasing in popularity, both for physical therapy and personal enjoyment. While these exercises are widely practiced around the world, the biomechanical basis for their effects is not well known. To gain further insight, Ge Wu and Xiaolin Ren, biomedical engineers from the University of Vermont, chose to study how the unhurried steps of tai chi benefit its practitioners.
Experienced tai chi instructors like Ben Stanley and Leslie Edwards often remind their students that slower is better. Stanley says that “it’s about breathing and being attuned to the muscles as you’removing. It’s important not to rush it, or you could miss the full benefits of the exercise.” In fact, Edwards pointed out that “the slower you go, the harder it is, and you definitely feel it in your legs.”

Tai chi can certainly be a test of patience for the inexperienced, as it is normally performed about 10 times slower than an average walk (2 mph), but it has a similar intensity to a moderate aerobic workout. Much of its direct benefits have been reported in the legs. To determine if and how the deliberate, gradual transitions in tai chi were responsible for these benefits, Wu and Ren employed a combination of biomechanical force plates, a camera-based motion analysis system, and EMG (electromyography) electrodes.

The 12 subjects, grouped as young (22-34 years) and old (64-80 years), performed a fundamental tai chi movement, “part wild horse’s mane,” at various speeds. Besides marking the participant’s motion from shoulder to toe, Wu and Ren measured the duration and magnitude of activation for six muscles that are key to ankle, knee, and hip mobility.

They found, as expected, that the duration of muscle activation was longer during slower motions in all six muscles. The effect was most significant for the rectus femoris (one of the quadriceps muscles) and semitendinosus (one of the hamstrings). When the participants sped up, these muscles lost this activation duration, while two muscles, the soleus (part of the calf) and semitendinosus, showed an increased activation. Thus, speeding up created an overall loss in muscle activation.

Age was also a factor in muscle activation. At slower speeds, younger subjects showed more muscle activation than older participants. This could be the result of older practitioners having a more limited range of movement. Stanley has often observed that it’s “difficult for older people to really sink down and fully extend in some of the postures compared to younger students,” but he has “seen posture, balance, and overall well being improve through time.”

Overall, Wu and Ren observed that speed had a greater impact on lower body muscles than other factors, like age or depth of movement. Their work demonstrate that slow, controlled movements can activate muscles more than rapid motion. The approach can also be used to study additional movements in tai chi and other exercises like yoga—a thorough understanding of exercise biomechanics should allow people to make more informed choices about what activities to pursue.

Read the original article in published in Ars Technica Aug, 2009