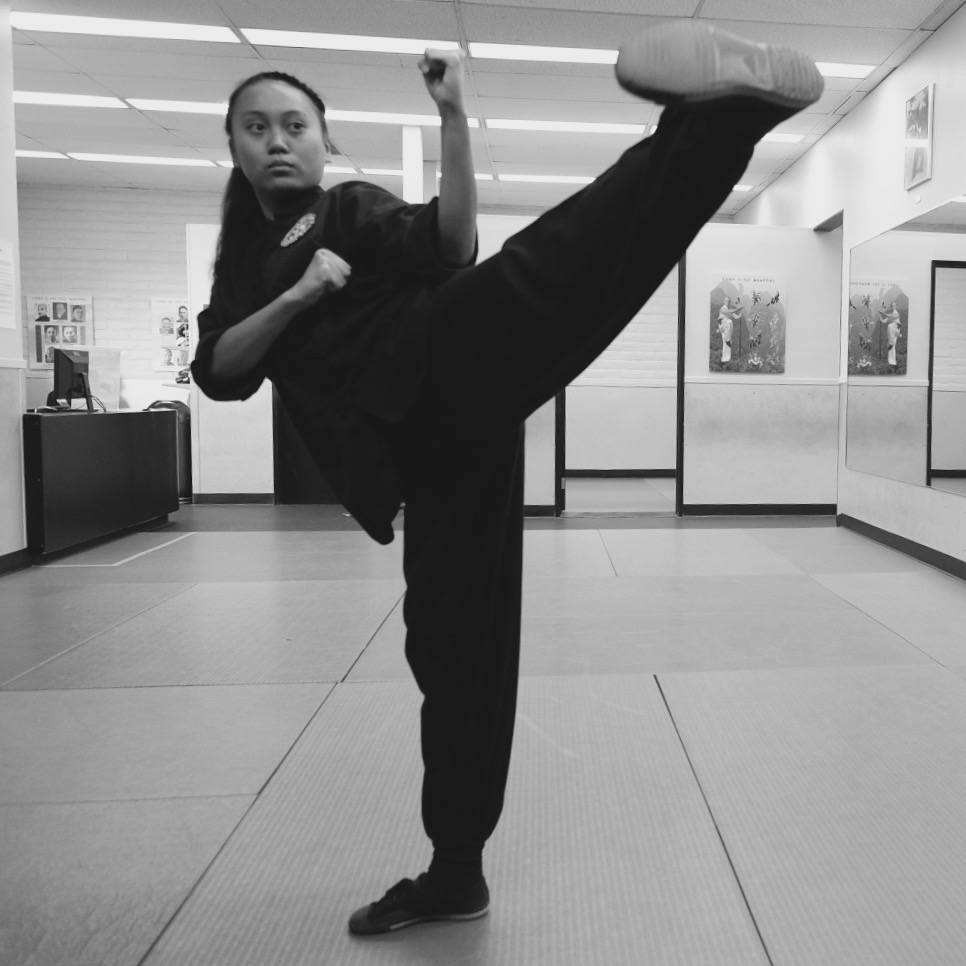 If you know much Karate history, you know the martial art came to Okinawa by way of traders from China’s Fukien province. You will also know that, until recently, Japanese and Okinawan karate styles contained only two or three types of kicks-front kick, side kick and sometimes a cross between the two similar to a roundhouse kick. All the jumping, spinning and hooking kicks seen in present day Korean and Japanese systems didn’t exist. I mention this because traditional southern Chinese martial arts still have only a few kicks (Fukien is considered southern China). Even some northern Chinese systems that do have a few more types of kicks do not have the Tae Kwon Do style of roundhouse or jumping and spinning kicks. Today’s Karate and Mainland China’s wushu styles have borrowed those kicks from their Korean neighbors.

The old saying that northern Kung-Fu styles kick high and southern systems kick low is not always true. We kick just as high in Choy Li Fut as do practitioners of northern Shaolin styles. The real truth is that if you can kick high, you can easily kick low. However, just because you can administer devastating low kicks doesn’t mean you can successfully kick high. You don’t need to be flexible to kick well. But you must be flexible to kick high.

Many northern Kung-Fu styles apply their kicks to the lower parts of an opponent’s body. The highest Tai Chi kicks are to the point of an opponent’s hip. Hsing-I and Praying Mantis also direct their kicks low. It’s just common practice to kick as high as possible in the forms for maximum flexibility and strength development.

Although the applications of most traditional Chinese martial art kicks are low, for training purposes we do them as high as possible, while still maintaining maximum power.

There are four basic kicks in the Choy Li Fut system. These are versions of the same kicks employed by the most traditional Chinese martial arts styles. The four techniques are front kick, side kick, a kick called ding guek that looks like a short roundhouse kick that some call a slant thrust kick. They are all low kicks, aimed below waist level. Kung-Fu front kicks use the toe for kicks to the opponent’s groin, the ball of the foot for stomach targets, and the heel against the opposition’s hip joint. There are two types of front kicks. One is a straight thrust kick, using the ball of the foot or heel as a striking surface. The other is a lifting kick, such as a groin strike where the toe or top of the foot lifts upward into the target.

Low side kicks target sensitive pressure point in the thigh, the opponent’s knee or shin. Side kicks where the body turns 90 degrees or more become back kicks. In Choy Li Fut, we call them fu mwi guek or tiger tall kicks. These are still basically side kicks. The semi-roundhouse or ding guek is usually a toe kick to pressure point on the inner thigh or back of the knee. The slant thrust kick is a kick made with the side of the foot, angling across and in front of the kicker’s stationary foot. It is a downward kick, aimed at the lower leg.

Although the applications of most traditional Chinese martial art kicks are low, for training purposes we do them as high as possible, while still maintaining maximum power. Kung-Fu tournament competitors and wushu artists often add jumping techniques to their kicks for flashier performances. There’s nothing wrong with this as long as you realize that it is no longer a kick from the original Kung-Fu style.

Unlike Tae Kwon Do that relies on kicking techniques before hands, southern Chinese systems only use kicks against an opponent’s lower body when in a grappling situation where the hands are occupied defensively. Of course, you might ask why not use more kicks, since legs are stronger than hands? It is true, there is a Chinese martial art saying that translates to, “Hands give 30 percent of your power and the legs give 70 percent.” However, the saying continues, “The leg gives 70 percent chance of danger.” This means you have a 70 percent chance of losing your balance while standing on one leg and kicking. With those odds, most Chinese martial arts choose to kick only as a last resort.