Homepage / Blog / The Power of the Animals 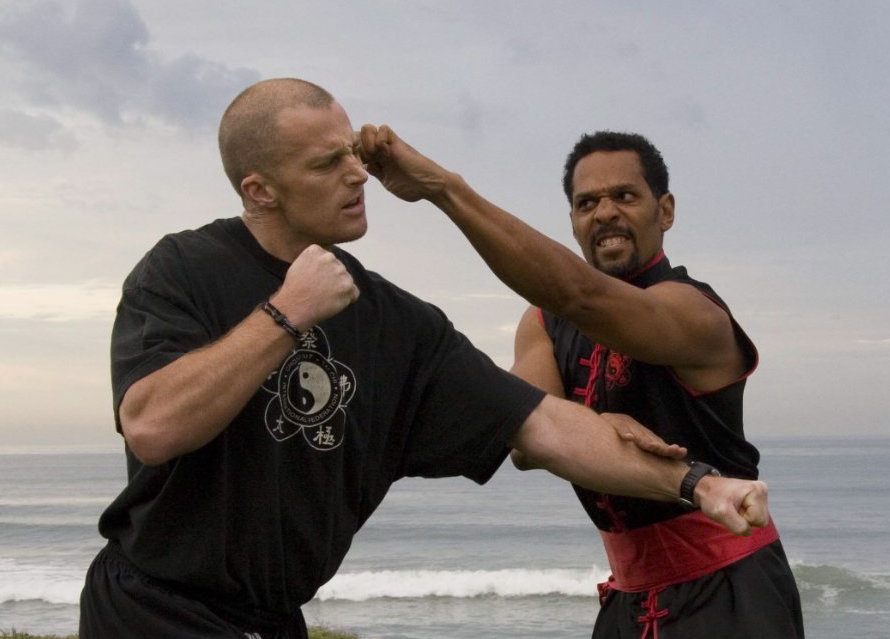 The Power of the Animals

People are always looking for ways to improve health and get in better shape. They need to look no further than martial arts for the answer. Looking better and feeling stronger and healthier are the major byproducts of adopting a martial arts discipline. There are as many debates about the best way to build strength and increase fitness as there are styles available to the practitioner.

I began my martial arts training in 1990 when I was drafted by the San Diego Chargers. Shortly after my second season in the NFL, I began looking for ways to improve my football skills and overall health. Since I was a huge Bruce Lee fan growing up, I thought a great way to get in shape was learning kung-fu. After all, despite his smallish stature, Lee was a physical marvel. If I could incorporate some of the training techniques that made him pound-for-pound the fastest and most powerful martial artists of his generation, those skills might help me become a better, more effective football player.

I sought the help of a kung-fu instructor in my area and settled on the fantastic, diverse world of Shaolin Five Animal kung-fu, which incorporates the best of both the internal and external disciplines of Chinese martial arts.

Shaolin five animal kung-fu teaches many fighting techniques, but more importantly it gives the martial artists a great foundation through stance training, breathing applications and a mixture of internal and external energy training. All these attributes help build strength, power and overall health.

Many factors make the five animal form optimal for health and martial arts cultivation: the practitioner will develop physical strength, libido, chi development, bone development and internal spirit. Since these are a mixture of both internal and external training techniques, it is said that when these five things are combined the result is a far superior martial artist.

Chan (Zen) Buddhism was introduced to China around A.D. 550. During the North-South dynasty, a monk named Bodhidharma traveled from India to Songshan Mountain in the Henan province, the site of the Shaolin Temple. There he meditated for nine years. At the age of 76, he began teaching healing arts to the monks of the temple. Since the monks spent much of their time in meditation, they were in poor physical condition. Bodhidharma gave them a set of exercises that would develop the physical strength necessary to maintain the monastery and protect them in the event of an attack. He gave them three exercises: lohan shi ba (18 hands of arhats); yi ji jing (book of changing tendons); and xi shui jing (book of washing bone morrow). At the end of the Ming dynasty (1368-1644), Zhue Yuen, Li Sou and Bai Yu Feng developed the fine animal form, which helped to complete the new shaolin system and had a major impact on the state of shaolin kung-fu.

The shaolin five animals consist of dragon, tiger, snake, crane and leopard. Each animal has characteristics that provide the practitioner with an array of offensive and defensive techniques. Only through a mastery of each of these animals can one hope to become a complete kung-fu stylist.

The Chinese dragon represents internal strength. Contrary to popular belief, there is no relation to the Western dinosaur or fire-breathing dragon. Instead, according to Buddhist writings, the Chinese dragon is a mystical creature that can show itself to those he wants, especially to those who have reached the highest levels of enlightenment. Chinese dragons also are said to live in oceans or large bodies of water and are believed to produce rain. They can make themselves large or small, and are sometimes said to be visible within the clouds if you look closely.

The dragon form combines internal and external energy to produce awesome and devastating strikes. Dragon techniques feature circular movements that can penetrate with sudden explosiveness. Though the claw is the primary hand technique used within the dragon form, there are also various palm and fist attacks that add to the dragon form’s effectiveness. However, using the waist in a whipping action to generate power is essential to the development of proper dragon energy. The dragon form uses internal conditioning through proper breathing techniques to develop qi (internal energy). This is done by using the lower body to pull in air with relaxed breaths. The breathing develops flexibility, strength and power.

In China, the tiger is said to be the king of all land beasts. The Shaolin Monks adopted the spirit of the tiger for its courage, strength and power. Because its energy is external in nature, the energy of the tiger is different from the other animals in the form. The tiger’s strength comes from hard-pressing attacks. Developing a strong back and neck is essential for strong stances. The primary technique in the tiger form is the tiger claw, which targets the opponent’s face, neck, groin, arms and wrist. The tiger form also utilizes palm strikes, fists and special kicking techniques, such as the tiger tail kick (fu mei geuk). Like the dragon, proper breathing is important for developing power and force. The practitioner produces certain sounds to expel carbon dioxide and replace it with the oxygen necessary to deliver the proper energy within his strikes.

The snake form is important for developing qi within the five animal form. Because the snake is a calm animal, it has more relaxed energy. When the practitioner cultivates this energy, the combination of relaxation is mixed with quick, piercing strikes. There are no closed fists within the snake form. Instead, the hands are open and used for penetrating chops and finger strikes. The snake’s spirit is calm and deliberate and once the practitioner develops the proper energy, his strikes are focused and lightning-fast.

The crane is known for its longevity. It is believed that the crane lives such a long life because its body contains a large amount of jing, or essential energy. A calm, meditative animal, the crane can stand on one leg for hours, without shifting its weight or growing restless. The crane form helps the practitioner hold his internal energy, which develops strength while building bones and muscles.

Like the dragon, crane techniques are circular in nature. However, the crane is always soft and relaxed, but strikes with penetrating speed and force. The crane form is known for using the “beak” to strike to targets such as the temple. It is also known for its long, extended strikes that mimic outstretched wings. The crane form allows the practitioner to deliver flowing, relaxed power as well as sudden and focused attacks.

In China, the leopard’s fierce and ferocious power yields only to that of the tiger. Though the leopard is smaller animal, it is believed to be, pound for pound, stronger. The leopard relies on a lightning-fast, powerful force that is produced from relaxed, whip-like techniques. It is important for the practitioner to develop a flexible waist, which allows him to develop quick footwork and explosive strikes.

Since the leopard form focuses on quick movements, there is little internal energy training. But the internal strengths of the dragon and snake blended with the speed and force of the leopard make a devastating combination. The mail technique used in the leopard form is a leopard fist that penetrates vital areas of the opponent’s body, such as the throat, solar plexus and groin. There are also elbow and forearm techniques. The leopard’s footwork is quick and short, which helps the practitioner develop strong stable stances.

Once the five animal practitioner has mastered the pattern within the form, he practices the three states of training. In the first stage, the practitioner performs the whole form slowly, mimicking tai chi or moving meditation. The slow and soft movements massage the organs and lead to health and longevity. The martial artist also learns the essence of each animal by moving slowly and methodically. Breathing is deep and from the abdomen to improve the circulatory system and build the practitioner’s qi.

The second stage of training is practiced with external power. The emphasis is on conditioning the bones, tendons and muscles, while developing speed and power. This type of training helps the practitioner build strong stances while increasing stamina and external strength. The five animal practitioner puts all his skills together in the third stage of training. The emphasis is on the spirit and strengths of each animal – both internal and external energy are intertwined to give each animal life within the form.

The snake and crane forms are preformed with relaxation and soft, or internal, energy until explosive power is released at the moment of impact. The tiger and leopard produce devastating, lethal attacks that are performed with quick and powerful, yet relaxed, external energy. The dragon combines both internal and external movements to deliver powerful techniques.

Five animal training not only provides the martial artist with the strength and power for devastating fighting techniques, but also teaches him to remain calm and relaxed in even the most dangerous self-defense situations.

I have truly benefited from the health aspects I received from studying five animal kung-fu. My kung-fu training contributed greatly to my success and longevity in the NFL and even though I am now retired, five animal remains an integral part of my physical and emotional well-being. (For a better understanding of the shaolin five animal form, read “Shaolin Five Animal Kung Fu” by grandmaster Doc-Fai Wong and Jane Hallander. For more information visit the plum Blossom International Federation at www.plumblossom.net.)