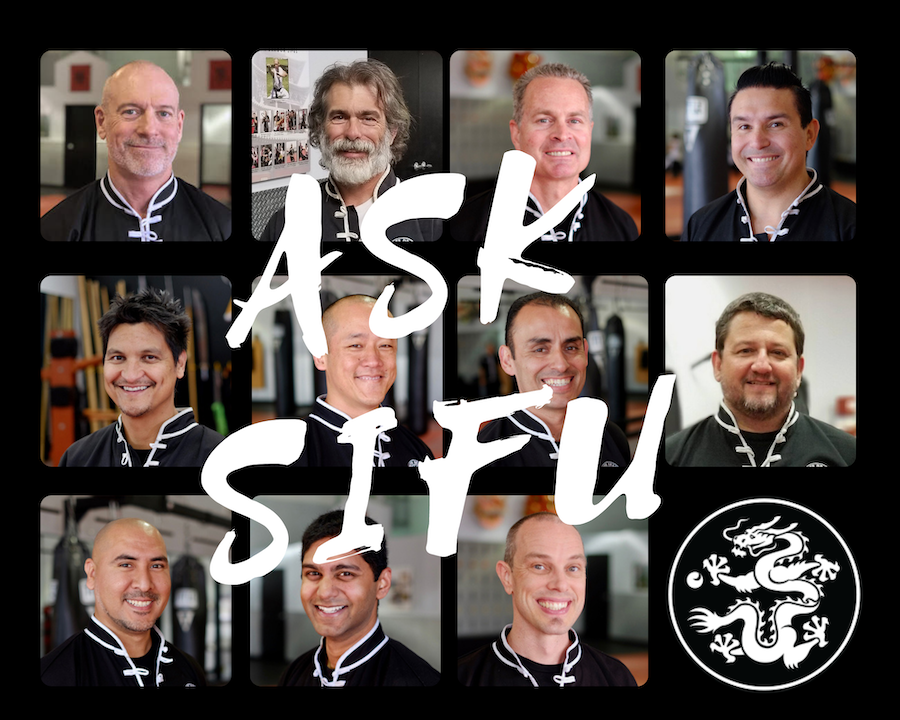 We’re excited to be launching a new column on our blog called “Ask Sifu.” This is a forum where the Sifus of White Dragon answer your questions about everything that is kung fu and tai chi. We aim to discuss topics that include history, culture, philosophy, and even the best training methods!

To kick start the column, we are pleased to feature our Tai-Sigung and the Founder of White Dragon Martial Arts, Master Nathan Fisher.

“What was a lesson that you learned from Grandmaster that resonated with you the most?”  Yzabel – White Dragon San Marcos

Thanks for your great question Yzabel!

Grandmaster Doc-Fai Wong is a grandmaster because of his uncanny ability to see exactly what is missing from a person’s martial arts skill. Because of his amazing depth and breadth of knowledge he has the ability to immediately tell you the most critical areas to improve upon to guide you to martial arts mastery.

In the early days of training with him, I already had an extensive martial arts background. After all, I started teaching Kempo Karate in Berkeley, California when I was 15, back in 1977. Nevertheless, it didn’t take him long to put his finger on exactly what was missing from my martial arts. He would always tell me to “use more body in everything you do”. By that he meant that one should never just move an arm to block or strike without throwing one’s whole body into the movement. This is just good physics, a way to maximize the power and explosiveness of a strike to stop an attacker as quickly as possible in a self-defense situation. That’s because the more mass you put into a block or strike, the more momentum it has when it finally hits your opponent. Additionally, the faster you move that mass, the greater the impact on your attacker’s vital areas.

Tied up in this lesson was the other critically important lesson of “never hold your breath” when doing anything in martial arts. By making sure you “breathe naturally” you avoid stiff, tense movements that end up being slow and sluggish. By making sure the breath is never interrupted you keep yourself relaxed and responsive. And from this calm state, you find you are able to evade your attacker at the right moment, and deliver the kind of explosive counter attack that can stop an assailant in his tracks.

My teacher taught me these profound lessons through the practice of tai chi, where breathing naturally and connecting the whole body to every strike and every movement is the main objective. By slowing things down to where you can contemplate each and every step in minute detail, you begin to sync up the breath to the movement of your body. At this slow speed, it is also easier to program your whole body to be the engine of moving your arms and legs, until there is never a time when you throw a block, strike or kick without the whole body powering it. Through this practice you eventually arrive at the ability to stay relaxed and move with decisive explosiveness in every movement.

It’s ironic, in a way, that through the study of slow moving tai chi one can eventually arrive at the ability to move even faster and hit even harder than if you studied only external martial arts like kung-fu or kickboxing, but I found this to be true for me. I think I must have had a great teacher!

“What was one of the biggest challenges that you faced to get where you are today, and how did you overcome it?”  Sam – White Dragon Clairemont

Hi Sam, thanks for you question!

I guess one of the biggest challenges I faced in building a martial arts organization was keeping everyone working toward the same big goal: to improve the lives of our students through traditional martial arts training. And, what I discovered is that this job got easier the more I clearly defined and actively taught the core values our organization stands for. (Incidentally, the core values of White Dragon Martial Arts are: martial spirit, martial ability, positive attitude, respect, health, responsibility, humility, and discipline.)

Once I got my students to adopt the values that were at the heart of being a successful martial artist and teacher it wasn’t that difficult to build a super successful organization that turned out many top notch martial artists. That’s because I always stressed the importance of leading and teaching by example. If you first embody the values you are trying to teach it really isn’t that hard to get people to follow you toward those ideals. If you treat others with as much respect as possible, for example, it isn’t difficult to produce students that value respect as you do.

Contemplating your core values often helps you realize how you should spend your time, and it also helps you prioritize the goals you have for your life. If you agree that one of your core values is health, for example, you might find you are less likely to skip workouts. By making a stronger commitment to your health, you might take a greater interest  in healthy eating and be less interested in substances that might ultimately be harmful to you.

So I realized early on that by practicing what you preach, especially with regard to your core values, you motivate the greatest number of people to follow in your footsteps. And if you build a team of people all dedicated to the same set of core values, it’s much easier to achieve the really big goals you’ve set for yourself and your organization.