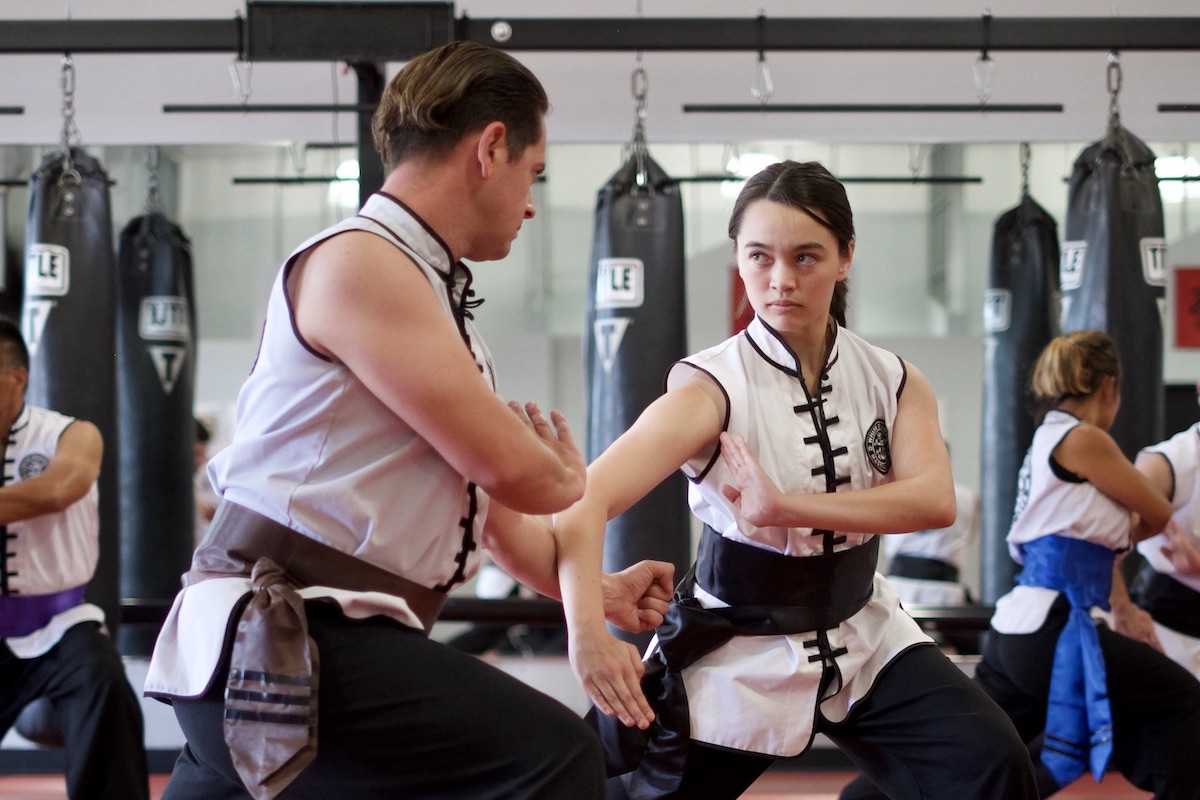 As a kung fu and tai chi teacher, one of the most common questions I get asked is, “What is the difference between kung fu and karate?” My short answer is, “Kung fu is the name given to the martial arts of China and karate comes from Japan.” On the surface, this brief answer works but it doesn’t pay proper respect to the origins of both kung fu and karate styles.

Although karate might be considered the quintessential Japanese martial art, “karate” (Kara te) was initially written as “Chinese hand” (唐手) in kanji. The word “Kara” is Japanese for “Tang” or “China,” and ” te” is “hand.” So the literal translation of “karate” means “Chinese hand” or “Tang Dynasty hand.”

The Tang Dynasty ruled from AD 618-907 in what was known as the “Golden Age” of ancient China. During the Tang rule, China experienced a period of peace, prosperity, and influence. The Tang Dynasty had widespread impact on all parts of Asia, which included the Ryukyu Kingdom of which Okinawa was a part. To better understand the Chinese roots of Japanese karate, you have to look West.

Bodhidharma and the Shaolin Temple

The story of Bodhidharma is largely based on legends. It is believed that he was born of Indian royalty in the 6th century and left his princely position to spread Buddhist teachings throughout China. He traveled to China’s Henan province and settled in Mt. Song, home of the renowned Shaolin Temple. Bodhidharma saw that the monks of the temple were in a poor physical state and unable to endure long hours of meditation. He then taught them a series of exercises that would strengthen their minds and bodies. These exercises would later develop into Shaolin Kung Fu.

Shaolin Kung Fu spread to all parts of China and would give rise to several hundred unique styles. Kung fu can be loosely divided into northern or southern systems. Northern styles are known for their kicking and fast moving footwork, whereas southern styles are known for close combat hand techniques. It was southern kung fu that would have a profound impact on the development of Okinawan martial arts. Southern kung fu is perhaps best known for styles such as Wing Chun, Hung Gar, Choy Li Fut, and White Crane, just to name a few.

The Ryukyu Kingdom and Okinawan Te

The Ryukyu Kingdom (AD 1429-1879) was a tributary state of Imperial China and consisted of a chain of volcanic islands which stretched from the southern tip of Japan to Taiwan. The largest island in the archipelago was Okinawa. Because of its geographic location, only 400 nautical miles east of Fujian Province and the southeastern part of the Chinese mainland, the Ryukyu Kingdom played a central role in maritime trade.

Although the details and dates are unclear, it is believed that the first transfer of martial arts between China and Okinawa took place in the late 14th century. At the time, there was a settlement of Chinese living among the Okinawans. This community would form the foundation of cultural exchange and play a vital role in the development of karate.

During this period, three distinguished forms of Okninawan “te” emerged. Named after their villages of origin (Shuri, Naha, and Tomari), the styles were Shuri-te, Naha-te, and Tomari-te. These martial arts were collectively referred to as “Tode” (唐手) which also translates to “Tang Hand.” The word “te” would continue to be used as a general term to describe Okinawan martial arts until the 20th century.

The Evolution of Karate

Kung fu would continue to shape the evolution of Okinawan karate throughout the 19th and 20th centuries. This led to the establishment of many different styles of karate that are still practiced today.

The oldest form of karate that comes from Okinawa is a style called Shorin-ryu. Although not officially named until 1933, Shorin-ryu has a much older history and dates back to the time of the Ryukyu Kingdom. The word “Shorin” is the Japanese word for “Shaolin” and “ryu” means school. Thus, “Shorin-ryu” translates to “Shaolin school.”

Another prominent style of Okinawan karate is Goju-ryu or “soft-hard school.” Goju-ryu was founded by a famous martial artist by the name of Chojun Miyagi (1888-1953) who traveled extensively to southern China and lived there for several years. The word “go” means “strong” and refers to closed fist straight-line attacks. The word “ju” means “soft” and refers to circular open handed techniques. Goju-ryu is known to have its roots in Nanpa Shorin-ken or “Southern Shaolin kung fu style.”

In 1897, a martial artist by the name of Kanbun Uechi (1877-1948) traveled to Fujian Province to study martial arts and Chinese medicine. Uechi was said to have studied both the Tiger and Crane styles of southern kung fu. He named his style Pangai-noon or “half hard, half soft.” In 1940, the name was officially changed to Uechi-ryu. Today, Uechi-ryu, along with Shorin-ryu and Goju-ryu, are Okinawa’s principal styles of karate.

A discussion about the early beginnings of contemporary karate is not complete without Gichen Funakoshi (1868-1957), considered to be the “Father of Modern Karate.” Born of Samurai lineage in Okinawa, Funakoshi studied Shorin-ryu (Shaolin style) and Shorei-ryu as a teenager. Later on he would make karate popular and introduce it to mainland Japan. In 1936, Funakoshi opened his first dojo located in Tokyo and named it “Hall of Waving Pines.” Shoto (松濤) translates to “pine waves” or “waving pines” and kan (館) translates to “hall” or “house.” His style became known as Shotokan Karate-do.

The word “karate” was used as a way of expressing “martial arts from China” until modern times. In the 1930’s with the rise of Japanese nationalism, there was a strong desire to distinguish the martial arts of Japan from those of its neighboring countries. So in 1936, the Japanese kanji character for karate that represented “China” (唐) was changed to the character that means “empty” (空). The two words are homophones, meaning that they have the same pronunciation but have different meanings. From this point forward, karate would simply be known as “empty hand” (空手).

Karate Comes to the USA

It is widely thought that karate was introduced to the United States by way of American servicemen who learned karate while stationed abroad in Okinawa, Japan and even Korea. Shortly after WW2, these servicemen would take their new found skills back home, open dojos, and even create their own individual styles.

However, a Japanese American by the name of James Mitose was teaching what he called Hawaiian Kenpo in Oahu as early as 1936. The word “kenpo” is a Japanese translation of the Chinese word “chuan fa” which means “flowering fist.” The term “chuan fa” dates back to AD 525 and is broadly used to encompass all traditional forms of Chinese kung fu.

Perhaps the most famous karate style in the United States is American Kenpo Karate founded by Ed Parker. The Hawaiian born Parker earned his Kenpo black belt under William Chow who was a direct student of James Mitose.

Parker opened his first dojo in Provo, Utah in 1954 and evolved his Kenpo Karate to make it more applicable to self-defense on the streets of America. American Kenpo Karate would be the foundation of many more uniquely American styles of Karate including Shaolin Kenpo, B.K.F. Kenpo, and White Tiger Kenpo, just to name a few.

Parker published his first book called Kenpo Karate in 1961. The book emphasized hard, linear movements and was a direct reflection of his early teachings and adaptations of the time. Later on in his career, Parker was strongly influenced by Chinese martial arts. His second book published in 1963, Secrets of Chinese Karate, adopted many Chinese concepts and methods.

From its Shaolin roots and its eastward journey by way of Okinawa, Japan, and Hawaii, karate has come full circle in modern day America. It continues to find new audiences today, being practiced by young and old alike for health and self-defense. However, you don’t have to look back very far to see karate’s Chinese Connection and kung fu origins.